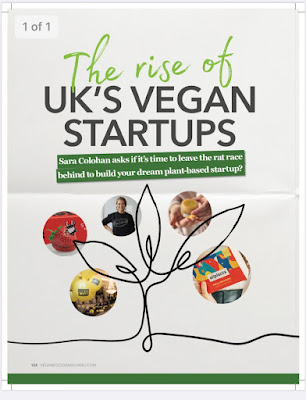 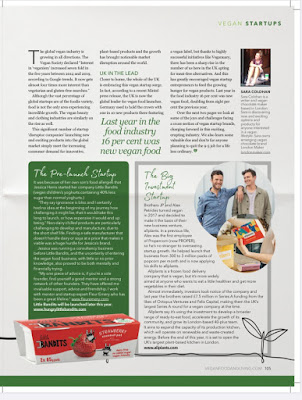 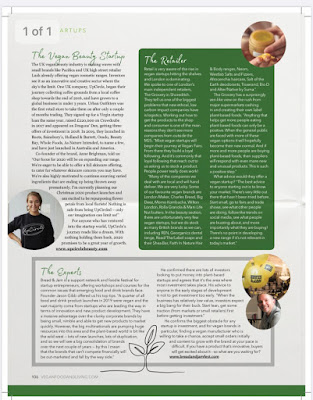 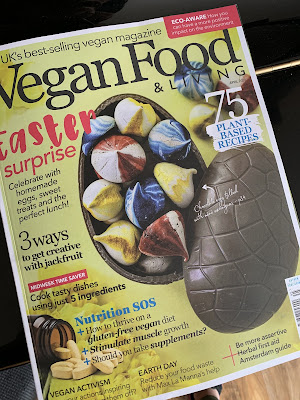 The rise of UK’s Vegan STARTUPs

Is it the ideal time to drop out of the rat race and build your dream plant-based startup?

We look at some of the joys and challenges facing a cross section of vegan startup brands, charging forward in this exciting, erupting industry.  We learn some valuable do’s and don’ts for anyone planning to quit that 9-5 job for a life less ordinary.

The global vegan industry is growing in all directions. The Vegan Society declared “Interest in 'veganism' increased seven fold in the five years between 2014 and 2019, according to Google trends. It now gets almost four times more interest than vegetarian and gluten free searches”

Although the vast percentage of global startups are of the foodie variety, food is not the only area experiencing incredible growth. The vegan beauty and clothing industries are also on the rise.

This significant number of startup ‘disruptor companies’ launching new and exciting products into the global market simply meet the increasing consumer demand for innovative, plant-based products and the growth has brought noticeable market disruption around the world.

Closer to home, the whole of the UK is embracing this vegan startup surge.  In fact, according to a recent Mintel press release, the UK is now the global leader for vegan food launches. Germany used to hold the crown with one in 10 new products there featuring a vegan label, but thanks to initiatives like Veganuary, there has been a sharp rise in the number of us here in the UK opting for meat-free alternatives, and this has greatly encouraged vegan Startup entrepreneurs.  Last year in the food industry 16 per cent was new vegan food, doubling from eight per cent the previous year.

“They say ignorance is bliss and I certainly had no idea at the beginning of my journey how challenging it might be, that it would take this long to launch nor how expensive it would end up being.”

Non dairy chilled products are particularly challenging to develop and manufacture, due to the short shelf life. Finding a safe manufacturer that doesn’t handle dairy or soya at a price that makes it viable was a huge hurdle for her brand.

Jessica was running a consultancy business before Little Bandits, and the uncertainly of entering the vegan food business, with little or no prior knowledge also proved mentally and financially trying.

“My one piece of advice is, if you’re a sole founder, find yourself a good mentor and a strong network of other founders. They have offered me invaluable support, advice and friendship. I work with mentor and start up expert Fleur Emery who has been a great life line”

Little Bandits will be launched this year. https://www.hungrylittlebandits.com/

Brothers JP and Alex Petrides turned vegan in 2017 and decided to make it the basis of their new business venture All Plants. In a previous life, Alex was the first employee of Propercorn, (now PROPER) so he’s no stranger to overseeing startup growth. He helped launch that business from 300 to 3 million packs of popcorn per month and is now applying his skills to AllPlants.

All Plants is a frozen food delivery company which is vegan, but aimed at anyone who wants to eat a little healthier and get more vegetables in their diet.

Almost immediately investors took notice of the company and last year, the brothers raised £7.5 million in Series A funding from the likes of Octopus Ventures and Felix Capital, making them the U.K.’s largest Series A round for a vegan company at the time.

Allplants say it’s using the investment to develop a broader range of ready-to-eat food, accelerate the growth of its community, and grow its London-based 40-plus team. They aim to expand the capacity of its production kitchen, which will operate on renewable and waste-created energy. Before the end of this year, they are set to open the UK's largest plant-based kitchen in London.

PLANT-BASED BEAUTY is officially a major trend. Mintel’s Global New Products Database stated that vegan product launches have risen by 175% from July 2013-June 2018 and Mintel’s Andrew MacDougall suggests that people “ want to align their beauty routine with the rest of their lifestyle.”

Martin Sawyer CEO SOIL ASSOCIATION CERTIFICATION stated “There is no doubt that the tide has turned on sustainable beauty and wellbeing. Plant-based, organic and natural products are well placed to have a strong impact in the coming year, leveraging many of the trends in this report but also as innovators and leaders in the sector overall. It will be an exciting year”.

The UK Vegan beauty industry is making waves with small brands like Pacifica and UK high street retailer Lush already offering vegan cosmetic ranges. Investors see it as an innovative and creative sector where the sky’s the limit. One UK company UpCircle began their journey collecting coffee grounds from a local coffee shop towards the end of 2016, and have grown to a global business in under 3 years.  Urban Outfitters was their first retail store to take them on after only a couple of months trading. They signed up for a Virgin startup Loan the same year, raised £220,000 on Crowdcube in 2017 and appeared on Dragons’ Den receiving 3 offers of investment in 2018.

In 2019 they launched into Boots, Sainsbury’s, Holland & Barrett, Ocado, Beauty Bay, Whole Foods, As Nature Intended, to name a few, and have just launched in Australia and America.

Co-founder of the brand Anne Brighman told us “Our focus for 2020 will be on expanding our range. We’re eager to be able to offer a full skincare offering, to cater to whatever skincare concern you may have. We’re also highly motivated to continue sourcing varied ingredients that are ending up being thrown away prematurely. I’m currently planning our Christmas 2020 product launches and excited be repurposing flower petals from local florists! Nothing is safe from being UpCircled – only our imagination can limit us!’’

For anyone who has ventured into the startup world, UpCircle’s journey reads like a dream. With nothing holding them back 202O promises to be a great year of growth for UpCircle. www.upcirclebeauty.com

Retail is very much aware of the rise in vegan startups hitting the shelves and London is most definitely dominating. We spoke to one of London’s main independent retailers The Grocery in Shoreditch. They tell us one of the main problems that new ethical, low carbon impact companies have is logistics. Working out how to get the products to the shop and ultimately the consumer is one of the main reasons that they don't see more companies from outside the m25.

“ Most vegan startups will begin their journey at Vegan Fairs (which being in Hackney we are blessed with a few), from there they build a loyal following. And it's commonly that loyal following that reach out to us asking us to stock a product. People power really does work!

Many of the companies we deal with are local and will hand deliver. We are very lucky. Some of our favourite vegan brands are London Maker, Charles Bread (check out their Almond Croissants WOW!), Big Deez, Momo Kombucha, Wilton London, Rolla Granola & Mani Life Nut butters. In the beauty section there are unfortunately very few vegan Startups, but we do stock as many British brands as we can including REN (whilst not entirely vegan their approach to sustainable packaging and high quality skin care is commendable), Georganics dental range, Read/The/Label soaps and their Shea Bar, Faith In Nature Hair & Body ranges, Neom, Westlab Salts and Fizzers, Afrocenchix haircare, Salt of the Earth deodorants, Tisserand, Bio D and Alter/Native by Suma.

Our pick of the lot is London startup Read/The/Label. They make the best handmade soaps. Based in Camden they hand delivers to our shop. The company’s ethics inform everything he does - no synthetics, no unnecessary packaging - just wonderful, clean products.”

The Grocery has a surprisingly zen-like view on the rush from major supermarkets cashing in and creating their own label plant-based foods “Anything that helps get more people eating plant based foods can only be a positive. When the general public are faced with more of these vegan options it will hopefully become their new normal. And if more and more people are buying plant-based foods then suppliers will respond with even more new and unusual products. This is such a positive step.”

We asked them what advice would you offer a vegan startup?

“The best advice to anyone starting out is to know your market. There's very little out there that hasn't been tried before. Start small, go to fairs & trade shows, see what other people are doing, follow the trends on social media, see what people are buzzing about, and more importantly what they are buying! There's no point in developing a new range if it's not relevant in today's market. “

Bread & Jam is a support network and foodie festival for Startup entrepreneurs, offering workshops and courses offering insight and hacks for the common issues that emerging food and drink brands face.  Founder Jason Gibb offered us his top tips.

“A quarter of all food and drink product launches in 2019 were vegan and the vast majority come from startups who are leading the way in terms of innovation and new product development. They have a massive advantage over the clunky corporate brands by being small, nimble and able to get new products to market quickly. However the big multinationals are pumping huge resources into this area and the plant-based world is bit like the wild west – lots of new launches, lots of duplication and so we will see a big consolidation of brands over the next couple of year – by this I mean that the brands that can’t compete financially will be out-marketed and fall by the way side.”

He confirmed there are lots investors looking to put money into plant-based startups and agrees that it ‘s the area where most investment takes place.  His advice to anyone in the early stages of development is not get investment too early. “When the business has relatively low value and therefore investors expect a big bang for their buck. Start lean, get some traction (from markets or small retailers) first before getting investment.”

He confirms the biggest obstacle for any startup is investment, and for vegan brands in particular, finding a vegan manufacturer who is willing to take a chance, accept small orders initially and content to grow with the brand at your pace. www.breadandjamfest.com

If you have a product that’s new and innovative - buyers will get excited about it so what are you waiting for? Get out there and try!