Set in the shadow of The London Eye, both the Udderbelly and Spiegeltent have added a splash of colour to London’s Southbank

Despite everyone catching Olympic fever, there are still lots of other diverse happenings in and around London this summer. One enduring city attraction is Priceless London Wonderground, the leafy carnival oasis at the foot of Embankment bridge. It rolled into town in May with it’s famous Udderbelly (the upside down cow–shaped purple tent!) and the decidedly more glamorous 500 seater Spiegeltent. For those of us unfamiliar, Spiegel tents were designed in 1930’s Germany and usually boast velvet and mirror clad interiors, surrounded by a decorative wooden outer structure.
Set in the shadow of The London Eye, both the Udderbelly and Spiegeltent have added a splash of colour to London’s Southbank, Jubilee Gardens. We must commend the crews of both venues who have braved the harsh British summer to host nightly shows ranging from traditional family fun to saucy burlesque cabarets. Meteorologically speaking the site seems to be entering the calm after the storm, (fingers crossed everybody!) and is quickly becoming a haven for tourists and non tourists alike.
Along with the glorious Spiegeltent, the site hosts a speakeasy style saloon, a secret Irish pub, street food restaurants and a band stand with flat screen TV’s where you can watch the Olympics from the comfort of a vintage deck chair. The whole space has the feel of a stylish outdoor festival, without the mud and the inconvenience of Port-a-Loos!
July saw the purple cow pack up and make its way to The Edinburgh Fringe, leaving more breathing space for the elegant Spiegeltent to re launch the site. It spread its elegant wooden decking, creating a vintage inspired travelling carnival, complete with freak show and vintage Coney Island rides. The sideshow hosted by The Royal Family of Strange People  have nightly shows filled with freak show performances and viewing rooms full of oddities like taxidermy ‘misshapes’ (including a two headed lamb) dating back to Victorian times.
In the fairground area, at over 60m high, you can take your seat on The Starflyer and view London like never before...or ride the vintage Cyclone Rollercoaster, a stunning replica of the legendary Coney Island ride.
The grand Spiegeltent will host an inclusive range of shows up until 30th September. Australian circus style cabaret show Cantina is the main feature at Priceless London Wonderground with beautifully styled lighting and costumes, it’s versatile cast of performers use physical human skill instead of smoke and mirrors to create their unique performances. Cabaret favourite Camille O Sullivan will do her second run of shows August 28th to September 1st. 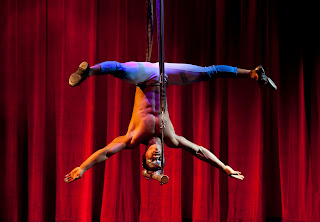 London’s longest running cabaret crew The Tassel Club Cirque du Cabaret will perform two gala events in September. Their shows on Friday September 7th and 21st will feature stars from Berlin, Japan and Columbia, performing a mix of circus and burlesque. There will even be an appearance from a hula hooping Elvis… you heard it here first!
Three times Olivier Award winning Fascinating Aida will do a month of shows from Monday 3rd of September to Saturday 29th
Described as ‘razor-sharp and magnetic’ by the Guardian these three ladies hit song Cheap Flights has had eight million views on Youtube
An Edinburgh Festival favourite Fitzrovia Radio Hour will perform on Saturday 29th September.
The carnival atmosphere and sundry of nightly shows should be reasons enough for you to venture into Priceless London Wonderground but add in the eclectic clash of hipster and tourist audiences lounging around on vintage deck chairs, free outdoor performances including aerial shows and in the fairground, the muted elated screams of people crazy enough to take a night time fair ground ride 60 meters over the Thames and you would be crazy to miss out.
Priceless London Wonderground