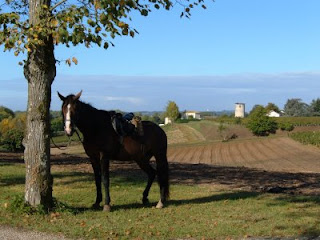 On your own for the holidays?

A nifty two hour flight with Air France got me from Dublin to Bordeaux, where I was immediately struck by the idyllic late September temperature of 22 degrees. A representative of Des Abrons Stables collected me from the airport and within an hour I was chatting to my fellow riders in our hotel lobby. The group included two Swedish men, both professors in their late 50’s, two Swedish women both in their 40‘s, one French gentleman about 40 and a Spanish girl called Maria only 26. I rounded off the group as the only Irish gal in her thirties. On chatting to the professors, I learned that they had both done this particular trek before and found it the best of many, including one they did in Ireland a year previous. Travelling alone can sometimes be a daunting experience, but this time I felt very much at ease mainly due to the relaxed, genuine manner of Pierre Chemineau the trek leader and owner .
As an accomplished rider I was confident of my horse riding abilities, but it had been a long time since I sat in the saddle for more than a couple of hours at a time. Each day of this seven day trek was scheduled for four to six hours riding, so it wasn’t going to be easy for any of us!
It was great to see that Des Abron’s horses were healthy, alert and well looked after. All ex trotters and race horses, they looked eager to start their new trek and capable of carrying us for six days! It was going to be a hands on experience as we were encouraged by Pierre to be responsible for our own horses, feeding and watering them every day before resting ourselves.
Each day we were given a map showing the direction and distance of the trek which basically made no sense to me at all! I was happy to fall in line and play follow the leader. For the first hour I obsessed about when we would get to gallop but I didn’t have to wait long! On signal, we took off through the flats, with the rows of vines lending themselves as tracks on a race course. I was out of breath by the time we reached the top of the stretch and memories of summer holidays spent horse riding with my sister came flooding back in vivid detail.

Pierre and Alex his trusty assistant alternated driving the truck, which went ahead of us each day carrying all our belongings and all the necessary provisions to make a lavish daily picnic. After enjoying an array of farmhouse cheese, salads, meats and copious amounts of vino, the picnic automatically became every ones highlight of the day. It was also a chance to rest before the long afternoon ride which could be up to four hours.
Our hotels on the first two nights were only two-star but to be honest, I was relieved that I wasn’t paying extra for unnecessary frills because all I wanted to do was sleep! There was a bath and a bed so I was happy! My back had started to feel the strain and I was exhausted from five hours a day in the saddle.
By the third night I was ready for a treat and low and behold we arrived at Domaine de la Gravette. A farmhouse style B &B where we enjoyed luxury fluffy towels and the most exquisite rustic French cuisine! Dinner was yet again accompanied by copious amounts of great wine. I had never experienced an all inclusive trip quite as generous as this one. The wine flowed like we were long lost relatives and as a result, I slept like a baby that night! Next morning, our truck was laden down with cases of the chateau’s wine as we bought supplies to bring back home.
On our final day the rain hit hard and as we struggled with our rain gear, the horses battled with the showers. It was a tough day, but it definitely made the vision of our last port of call, Chateau d’Arche a near spiritual experience! A vivid rainbow appeared as we made our way up the hill, framing the mirage-like chateau. I was mesmerised by the beauty of this four star sanctuary. We tended to our horses, setting them free to graze for the last time.

It occurred to me as I soaked away my aches in the beautiful antique bath of Chateau d’Arches, that even though the week had been a very active one, my state of relaxation was complete. Every decision on where, when and what to eat and where to go was made for me, leaving me time to build a relationship with my horse and the other riders on the trip. Just being outdoors for eight hours a day was such a welcome change to my normal routine that I’m sure the fresh air did something for my soul! I couldn’t think of a low point from the whole week and when Pierre told us we travelled 220 km in total I felt very proud of every step.

This trek was called The Tour of Great Bordeaux Wines and was an advanced ride out where we galloped several times everyday on eager horses. Our route took us from the Medoc to Sauternes via Pomerol, through the famous St Emilion, on to Cadillac, Cote de Blaye, along the Dordogne river, through forests of Landes Girondines.
This may not suit everyone riding skills so Des Abron offer about ten different styles of treks and horses to suit different levels. They include The Basque country, in the footsteps of the smugglers, The Provence, The Dordogine river, which is suitable for beginners and the tour of the chateaux of the Loire Valley.