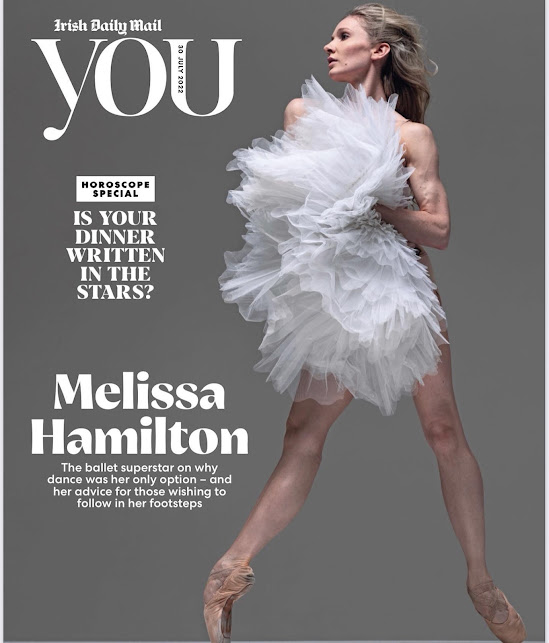 How Irish ballerinas shaped ballet as we know it and took on the global stage.

If you search the internet for Irish ballerinas, google yields a rather short list, despite the fact that it was an Irish born dancer who founded the London ballet school, ultimately becoming the Royal Ballet. Ninette De Valois (born Edris Stannus) was born in 1898 in Blessington, Wicklow and is widely regarded as one of the most influential figures in the history of ballet and known as the "godmother" of English and Irish ballet.

When De Valois returned from training with the Ballets Russes in 1927, she established the Academy of Choreographic Art, a dance school for girls in London and the Abbey Theatre School of Ballet in Dublin. In London, her ultimate goal was to form a repertory ballet company, with dancers drawn from the school and trained in a uniquely British style of ballet. Students of the school were given professional stage experience performing in opera and plays staged at the Old Vic Theatre, and she choreographed several short ballets for the theatre. De Valois lived until she was 102, making media appearances right up to her death in 2001.

Moving into the 90’s it was the turn of Monica Loughman from Santry to break the mould. It’s hard to imagine how tough it was for her to leave Ireland at fourteen for Perm State Ballet in Russia, becoming one of the few Westerners to dance for the prestigious Perm State Theatre of Opera and Ballet. She trained and danced for the company for 16 years then moved back to Ireland to establish a full-time training programme for professional ballet dancers, as well as a network of ballet schools. She created The Monica Loughman Elite Ballet by training indigenous dancers and hiring the support of Russian ballet figures. Her company is now Ireland's largest ballet training school and currently trains dancers for professional careers in ballet, with some being accepted for an apprenticeship with the Russian Ballet Theatre in St. Petersburg, Russia. Loughman is probably best known to us non-ballet folks by her many TV appearances from Podge & Rodge to The Late Late Show, and also as the co-writter of The Irish Ballerina, her novel based on her own experiences as a young dancer. Monica Loughman never met Ninette De Valois but she did get a surprise delivery of flowers which simply read ‘Congratulations, Love Ninette’ after her performance on The Late late show. Monica hopes to leave a legacy like Ninettes, forging a future for ballet in Ireland.

Fast forward to Irish ballerinas active on the international stage and there is one very prominent name of the list. Monica Loughman never met Ninette De Valois but she did get a surprise delivery of flowers which simply read ‘Congratulations, Ninette’ after her performance on The Late late show. Monica hopes to leave a legacy like Ninettes, forging a future for ballet in Ireland. Acclaimed dancer Melissa Hamilton has come a long way from her childhood home in Dromore, County Down enjoying her current role as First Soloist of The Royal Ballet.

Hailed as one of UK's brightest ballet stars, she won the Youth American Grand Prix back in 2007 and was then offered a place at the Royal Ballet. She was promoted to First Artist in 2009, Soloist in 2010 and First Soloist in 2013. She’s gathered many an accolade including Critics Circle ‘Most Outstanding Female Performance’ Award, a nomination for the Times Breakthrough Award at the South Bank Show Awards and The Sunday Times named her as one of the ‘Top 30 Power Players under 30’. The phrase blood sweat and tears could certainly apply to her career path. Growing up in Ireland there weren’t as many opportunities available to a young girl with dreams of being an international ballerina, nor were there many influential people to spot her talents. In fact, at an early stage of her career, Melissa was told she didn’t have what it took or indeed the time that it would take to become a ballerina - as she was already a few years older than her fellow dancers.  "I'm glad it worked out because I never had a Plan B," admits Melissa who is now based in London full time and is in demand for solo projects worldwide, most recently partnering with Italy's Roberto Bolle, principal dancer with La Scala in Milan for their 2022 tour. She first danced with Bolle in the World Ballet Festival in Tokyo in 2018 and the pair continue to be a huge draw at prestigious venues around Italy, among them the open-air Arena di Verona where 14,000 people came to applaud their artistry on stage. With her huge following on line (over 90,000 followers on Instagram) she can draw quite the crowd herself.

Melissa has a busy few months ahead. After a debut in a world premier at Royal Opera House this June, she starts her Italian tour. I was lucky enough to catch up with her for a quick chat about her incredibly busy career.

“There is no doubt that ballet is hard work and more a vocation than a job. I may be a first soloist with the Royal Ballet, but that doesn’t mean I’ve reached a point where I don’t have to train.  No matter what position you hold in a professional company, or how many years, you will still have training class every day.  Rehearsals for all that we perform on stage, are only possible if we warm our bodies up and train our muscles each morning in class. There is never an end point or finish line, there is always something new to learn or explore.  Whether it is revisiting a role previously danced, to add more layers to our performance or new work that is constantly being created. Naturally because as dancers we are pushing our bodies to do exceptional things, there are aches and pains to contend with.  Thankfully though I have never had an injury that has kept me away from the stage for a prolonged period of time.

When we spoke, she had just arrived to Milan to perform with Roberto Bolle. Their professional relationship has endured and this is her 7th year dancing with him. “ I will go to the theatre to take class later this evening and have rehearsals on stage. Class tomorrow morning, a dress rehearsal of the show followed by another warm up class and then the opening night of the run.

I adore dancing with Roberto and feel very honoured to have been performing as his partner in these shows across Italy and internationally since 2015.”

Touring and performing with the Royal Ballet would be enough for many but Melissa also loves teaching and often hosts masterclasses in the UK and beyond.

“I truly enjoy teaching and find it incredibly fulfilling to pass on some of the knowledge and skills that I have learnt throughout my career so far.”

So what words of wisdom and support could she offer a young Irish girl or boy sitting in their bedroom dreaming of becoming a ballet star?

“The only true way to become a ballet star is to work to become it.  Dedicate yourself and commit to your dream to make it happen working with teachers and coaches who share your drive and ambition. Keep yourself educated and inspired by watching as much as possible. The ballet world, on an international level, is so accessible now on YouTube and social media platforms.”

Ballet is such a time consuming profession in yet another remarkable feat, Melissa has managed to take the time to fall in love and in-between the heavy training and performing she is planning her wedding later this year. The man in question Michael Christou, the founding director of property development and interior design company 1.61 London.

“ Michael is an incredibly successful creative who plays piano, writes music and sings so there is a definite artistic atmosphere in our household. It feels so special to have found such an amazing man to share and build a life together with and I cannot wait to get married to him later this year.”

De Valois had passed away before Melissa began her assent into the tough international world of ballet and we can only imagine how proud she would be that Irish girls and boys are continuing on the path she blazed so many decades before.

Melissa Hamilton (INSTA @_melissahamilton ) is performing with Roberto Bolle and Friends as his partner, in his summer tour around Italy in July. Rome | Florence | Verona (arena of 14,000 capacity) | Genoa | Taormina.

Appearing as an invited guest artist with Studio Wayne McGregor Company in Tree of Codes performances in Helsinki in August.

Performing the leading role of Mary Vetsera in Mayerling which opens the Royal Ballet’s 2022/23 Season at Royal Opera House, Covent Garden this autumn.