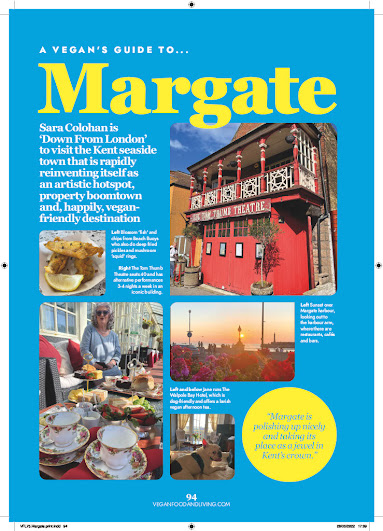 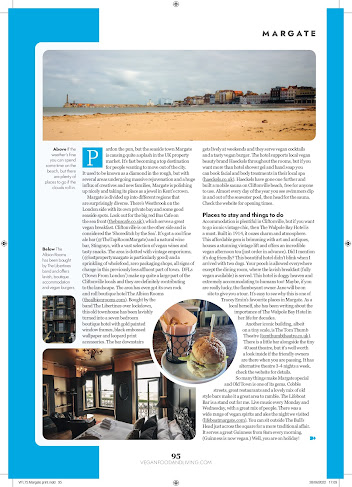 Pardon the pun but the seaside town Margate is causing quite a splash in the UK property market. It’s fast becoming a top destination for people wanting to move out of the city. It used to be known as a diamond in the rough, but with several areas undergoing massive rejuvenation and a huge influx of creatives and new families, Margate is polishing up nicely and taking its place as a jewel in Kent’s crown.

Margate is divided up into different regions which are surprisingly diverse. There’s Westbrook on the London side with its own private bay and some good seaside spots. Look out for the big red Bus Cafe on the sea front (www.thebuscafe.co.uk) which serves a great vegan breakfast. Cliftonville is on the other side and is considered the ‘Shoreditch by the Sea’ . It’s got a cool fine ale bar (@TheTapRoomMargate)  and a natural wine bar Stingrays with a vast selection of vegan wines and tasty snacks. The area is dotted with vintage emporiums, (@lostpropertymargate is particularly good) and a sprinkling of wholefood, zero packaging shops, all signs of change in this previously less affluent part of town.  DFLs (‘Down From London’ ) make up quite a large part of the Cliftonville locals and they are definitely contributing to the landscape.  The area has even got its own rock and roll boutique hotel The Albion Rooms (www.thealbionrooms.com). Bought by the band The Libertines over lockdown, this old townhouse has been lavishly turned into a 7 x bedroom boutique hotel with gold painted window frames, black embossed wall paper and leopard print accessories. The bar downstairs gets lively at weekends and they serve vegan cocktails and a tasty vegan burger. The hotel supports local vegan beauty brand Haeckels throughout the hotel rooms but if you want more than hotel shower gel and hand soap you can book facial and body treatments in their local spa (www.haeckels.co.uk). Haeckels have gone one further and built a full functioning mobile sauna on Cliftonville beach, free for anyone to use. Almost every day of the year you will see swimmers dipping in and out of the seawater pool then heading for the sauna. Check Haeckels website for opening times.

Accommodation is plentiful in Cliftonville but if you want to go iconic, vintage chic - then The Walpole Bay Hotel is a must. Built in 1914 it oozes charm and atmosphere. This affordable gem is brimming with art and antiques, houses a stunning vintage lift and offers an incredible vegan afternoon tea (just order in advance). Did I mention dog friendly? This beautiful hotel didn’t blink when I arrived with two dogs. Your pooch is allowed everywhere except the dining room, where the lavish breakfast (fully vegan available) is served. This hotel is doggy heaven and extremely accommodating to humans too! Maybe, if you are really lucky the flamboyant owner Jane will be on site to give you a tour. It’s easy to see why this is one of Tracey Emin’s favourite place in Margate. As a local herself, she has been writing about the importance of The Walpole Bay Hotel in her life for decades.

Another iconic building, albeit on a tiny scale is The Tom Thumb Theatre. (www.tomthumbtheatre.co.uk)There is a little bar alongside the tiny 40 seater theatre but well worth a look inside if the friendly owners are there when you are passing. It has alternative theatre 3-4 nights a week so check their website for details.

So many things make Margate special and Old Town is one of its gems. Cobble streets, great restaurants and a lovely mix of old style bars make it a great area to ramble. The Lifeboat Bar is a stand out for me. Live music every Monday and Wednesday with a great mix of people. There was a wide range of vegan spirits and ales the night we visited which helped get us in the mood for a dance round the bar stools!  ( www.lifeboatmargate.com) You can sit outside The Bull’s Head just across the square for a more traditional local affair. It serves a great Guinness from 8am every morning. (Guinness is now 100% vegan) Well, you are on your holidays!

For accommodation in Old Town try Beet Beds. (www.beetbeds.com) This hotel is run by Paul Bayne (another DFL!) and is quite unlike any other accommodation I’ve seen in Margate. Some of it is subterranean, designed and built with style by Paul himself. He used to run Margate’s main vegan restaurant Beet Bar which is currently closed for huge expansion and renovation. Sadly it won’t reopen until 2023.

Like any evolving town, the restaurants in Margate are ever changing. Despite the closing of Beet Bar for renovations, there is plenty of choice for vegans all around margate, especially if you are happy to share the menu with non vegans. A great example is Beach Bouys offering a great vegan fish and chips. Located on the seafront, they have a wide range of vegan options like deep fried pickles, blossom and chips and their new deep fried mushroom ‘squid rings’. They told me they are extending their vegan menu because their blossom and chips is selling just as well as their cod and chips.

If you are staying longer than a min break and you want to stock up on vegan supplies to enjoy at home, Made From Plants (www.madefromplants.co.uk) moved their business from London to Margate and are busier than ever making vegan bagels, cinnamon buns, pizza and lots more staples. They offer weekly pick ups and host a monthly stall at Cliftonville farmers market. It’s also worth noting if you are staying for longer that nearby towns like Folkstone, Whitstable and Canterbury all run vegan markets, mostly at weekends. Just google for dates and times.

Local perfume brand Lovorika (lovorika.com) set up in Margate and is a vegan, ethical brand rooted in natural perfumery and aromatherapy. The founder Daphna Rowe is certified in Aromatherapy and has studied the ancient art of natural perfumery and incense making. In 2020, Vevolution named Daphna as one of the ‘Incredible Women Creating Positive Change in the World’. Along with purchasing perfumes local to the area, check the website for workshops and talks which she runs throughout the year.

This vibrant part of the Kent coast line is enjoying its resurgence and proving a haven for everyone wanting a very different life by the sea. It’s becoming a mecca for creatives and artists not least because it has it’s own Turner Museum (www.turnercontemporary.org) but Margate born Tracey Emin has just bought a large property, soon to be converted into an art school. There are lots of little art galleries dotted around supporting local artists and when you see Margate’s skyline any evening of the year, you’ll easily see why it’s still an inspirational spot to paint, walk your dog, sip a vino or simply enjoy a tasty gelato watching the sunset. Oh we do like to be beside the seaside……