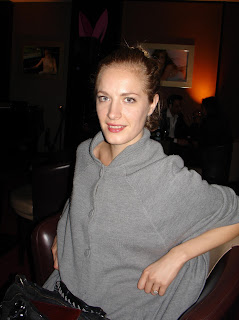 It amazed me that the majority of practitioners were content to work within the tradition of mimicking the natural habits of their animals. It probably helped that I am quite a competitive person and if I couldn’t do it better, I wanted to do it differently.

LC: As taxidermy is not, by any means a popular career choice, I’m fascinated and curious about your chosen path! What were your main influences or set of circumstances that led you to become a taxidermist?

Polly Morgan: It feels to me as though it was a confluence of apparently arbitrary choices I made leading up to and following on from my degree. I chose Queen Mary College as I was more keen on their focus on Modern Literature than the more traditional London University courses. This brought me to London’s East End, which in turn led to my taking a job at a bar in Shoreditch. All my influences could be found drinking or working here. The area was a hub for artists and I soaked everything up like a sponge. I’ve always been adventurous and have liked to try as much out as possible. Taxidermy was last in a long line of subjects I tried my hand out at in my early twenties.

LC: You are not a traditional taxidermist, as in you don’t try to charge your subjects with life and create startled looking versions of the original animal. Your affect is much more subtle and narrative. Did you make a conscious decision to ‘tone down’ taxidermy as we know it and salvage its dated, bad rep? What are your views on the more traditional style of taxidermy?

PM: I don’t feel that anything I’ve done has had such a clear motive as this; it has all been much more instinctive. I started by just making the things I wanted to own and I just found that much of the traditional work, beautiful though some of it is, lacked imagination. It amazed me that the majority of practitioners were content to work within the tradition of mimicking the natural habits of their animals. It probably helped that I am quite a competitive person and if I couldn’t do it better, I wanted to do it differently. 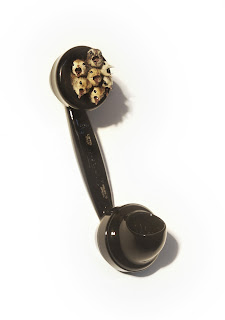 LC: Your works are unique, beautiful presentations yet with an undeniable morbid undertone, not least because we all know there is a lot of cutting, dismembering, pickling and freezing of body parts to achieve the final result. Does it ever make you queasy or on a deeper level do you ever feel you are dishonouring your subjects by displaying them after death?

PM: No. And I am quite adamant about that. I think that this argument is to foist human sentimentality onto creatures that are not much like us. They rarely mourn their dead, and frequently eat them. I tend to say that the worst thing I am doing by removing a dead animal from the chain is to deprive a crow of a meal.
The longer I have been doing this the more alien the idea that my work is morbid is to me. I have endless respect for the living, but I’m not sure it’s necessary to respect an inert object.

LC: It seems fitting that you have your studio in the historically soaked old East End of London as your work is heavily influenced by the past. Your first exhibition, held to much acclaim in Bistroteque had Victorian influences, the next Psychopomps was influenced by Greek Mythology. Can you give us an insight into your new exhibition 'Endless Plains' and what inspired it? 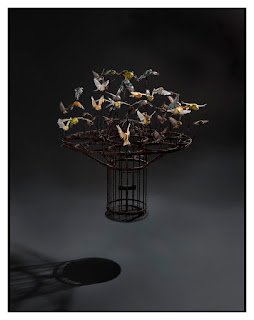 PM: It was inspired by a trip last summer to the Serengeti (which translates in English as Endless Plains) and my subsequent hospitalisation & near death when my appendix burst and I developed gangrene and peritonitis. The landscape was littered with bodies, both living and dead, the dead in varying states of decay, some hollowed out by vultures. Being operated on saw the scalpel turned on me and the fallow period spent lying on a hospital bed led me to more contemplation on the cycle of birth/life/death. In the Serengeti it couldn’t have been more clearly visualised; Wildebeest crossing the river and feeding the crocodiles, vultures sitting in wait watching injured animals on their last legs. In hospital they at least try to cure you but, failing that, they have a pragmatic approach to your death, harvesting your organs for the next patient. My new work is all about the host/parasite relationship, illustrated in perverse or unusual ways; piglets suckling on a dead tree, sap running down their chins as though they have drained it of life. Phallic mushrooms spring from dead bodies and are eaten by birds.

LC: I read recently that because you studied English not art, you felt like something of an impostor in the art world, as if you "fell into this role by accident" and you were uncomfortable with the title of "artist". Is that something that’s finally faded now that you have carved your mark ( bad pun intended!) in the world of British art and you are a highly valued, collectable artist world wide?

PM: Yes, this was just something I felt in the beginning as it all came upon me rather suddenly and with no planning. I felt guilty and unprepared as I knew many people who had spent years studying art and honing their ideas and it seemed ridiculous that I was given all this attention without even asking for it. I do feel a responsibility to improve my own art education as I go and to never get complacent and churn out the same stuff endlessly. I push myself further with every show and it’s only now I’m starting to feel I’ve earned my place in the art world.

LC: You are in a relationship with fellow artist Mat Collishaw. I’m sure I’m not the first to wish for some kind of collaborative macabre epic magnum opus! Is it something we could hope for in the future?

PM: We help each other out a lot with work when it comes to discussing ideas/presentation etc but prefer to work independently to each other. However, we have had an idea for a joint project that could be quite spectacular... if only we could find the time!