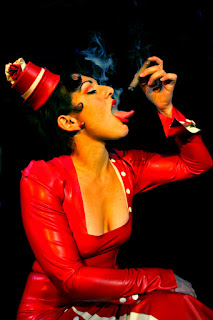 The Times hailed her as “a fabulous courtesan of comedy”.  The Guardian mused how she effortlessly journeys from “the ridiculous to downright sexy” as mistress of ceremonies in London’s best loved cabaret La Soiree (formally known as the Olivier-winning La Clique). She’s seen as a true iconic image of modern day circus and a legend among her peers in the industry. Over the din of a bustling East London café I relay just some of these lofty accolades to  Miss Behave (AKA Amy Saunders) and in her distinctive husky voice, she modestly and simply describes herself as “a live cartoon-ish figure, a bit of a drag queen with a passion for comedy and the bizarre.”

So, you’ve been asked a million times before – but we all want to know how you became a sword-swallower. It’s not an everyday occurrence that someone decides on that particular career.

I am a mouthy bird so a friend gave me a book (Memoirs Of A Sword Swallower by Daniel P Mannix.) about a sword swallower and jokingly said it was the only way to shut me up. I have always been orally fixated, so I saw it as a challenge. So, it sounds ridiculous, but I taught myself with a 2ft-long sword, a mixture of tenacity, luck, trial and error. It was not easy…or pleasant…3 years of hard work and I became a sword swallower!

So, it’s not as easy as you make it look! How long did it take from learning the basics to actually getting on stage and making an entire room erupt on their feet in sheer awe?

It was borne out of necessity. I was skint at the start. I began busking in bars in Soho. Over the next few years I played in everything that was on offer, and plenty that was not. This moulded me into the performer I am. Regardless of skills, adaptability is the name of the game.

When and how did the whole Guinness World Record Holder thing come about?

In 2000 Guinness approached me about setting the female world record for multiple swords. I do like a challenge, so I grabbed it. I set it at 5 and then broke that with 6, then 7...

Have you ever hurt yourself on stage – lots of people still think swords aren’t real, or not sharp etc – have you war wounds?

I once cut my stomach and lost so much blood from internal bleeding I nearly died. I learnt my lesson though…oh wait, no I didn’t!

You’ve performed around the world with La Clique and La Soiree and indeed as a host in your own production The Crack – do you pinch yourself sometimes at the interesting path sword swallowing has led you on and what do you think would have been your back up career choice if you hadn’t read that interesting book all those years ago? 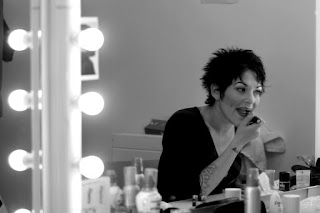 Honestly, I see our industry, from front of house, to barstaff, to stage performer, as hospitality. All I have ever done is service people. We are all prostitutes, and I see that as a good thing. I facilitate peoples good times. It is all I know how to do. And whether Im doing hand jobs out the back, pulling pints at the bar or swallowing a sword onstage, I love it.


Professor Vanessa Toulmin sounds like a very interesting character. The head of Cultural Engagement University of Sheffield, a successful author, she has compiled the largest collection of paraphernalia relating to the history of circus and fairground entertainment in the UK. You are working with her bringing the history of the fairground to the masses as part of The Round House CircusFest in April. Who found who and tell us a bit about the show.

I was hired to host a variety night at the Grand in Blackpool the first year of Showzam. We bonded over a love of illegitimate entertainment and have been together ever since. The Wondershow is a culmination of our work there. It’s a collaboration of all of us who have turned that festival into the wonder and delight it is today. Professor Vanessa, Jon Marshall's Sideshows, The Insect Circus, Marawa the Amazing and myself. Very exciting.

Thanks for taking the time to chat and glad to hear you enjoy hosting so much– not least because you are hosting the next Tassel Club Cirque du Cabaret show on April 21st in Hoxton Hall, the Saturday before your run in Round House. That will be a busy week for you!

I heard you warm up using plenty of tequila shots!

Sara Colohan
I am a freelance writer and creative living in London. I am available for research work and features writing.